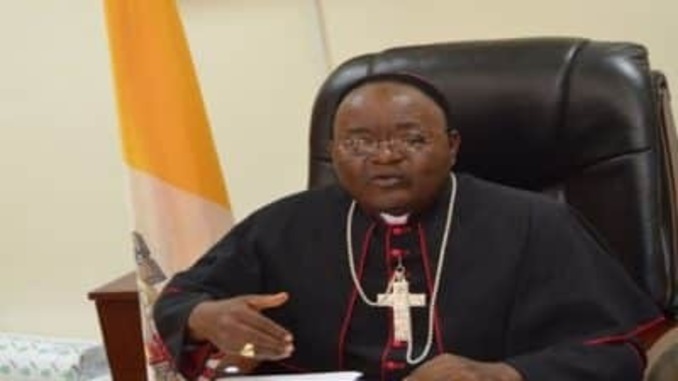 Looking for why Kampala Archbishop reveals why Tithes should be deducted from worker’s salaries by government?

Then read the unbelievable revelation below…

The Archbishop of Kampala, Cyprian Kizito Lwanga, has advised the Ugandan government to deduct tithe from workers salary before they are paid.

He stated this while delivering a mass in which he said the failure to pay tithe by members is affecting church project.

“Whenever we ask for tithe, everyone gives only what they have at that time. But the Bible says a tenth of whatever you earn belongs to the church,” said Archbishop Lwanga.

“Give me your support as I front this proposal because it is good for us. Aren’t you tired of putting money in the baskets all the time?”

The Archbishop stated that he wants Uganda to practice what Germany is practicing where Germans who are Catholic, Protestant and Jewish have a tax system for the church.

“I was told Germans made agreements with their government to deduct monthly tithe from their salaries and forward it to the church and this money they use to build and renovate their churches,” Archbishop Lwanga added.

Meanwhile, Biodun Fatoyinbo, the senior pastor of the Commonwealth of Zion Assembly (COZA), says he has decided to step aside from the pulpit of the church.

In a statement released on Monday, he said the move was the advice of his mentors.

Fatoyinbo had been in the news since Friday when Busola Dakolo, a celebrity photographer and wife of Timi Dakolo, Nigerian musician, accused him of raping her when she was 16 going on 17.

“I have taken time to pray and seek spiritual counsel from Christian leaders around the world who feel very concerned about the ongoing reports in the media,” the statement read.