Ghanaian actress Yvonne Nelson calls John Dumelo a fool following a post the actor shared on social media.
Dumelo on Friday took to his Instagram to share a meme which is fast going viral on the internet.

Written on the meme was the inscription:

“I miss the married women in the Bible who used to give their maids to their husbands as side-chicks. The current ones don’t read their Bibles. Only jealousy and selfishness nkoaaaaaaa.

However, Yvonne Nelson who is known to be a good friend of Dumelo did not see it as such. Even if she saw it as a joke, she definitely did find it amusing. 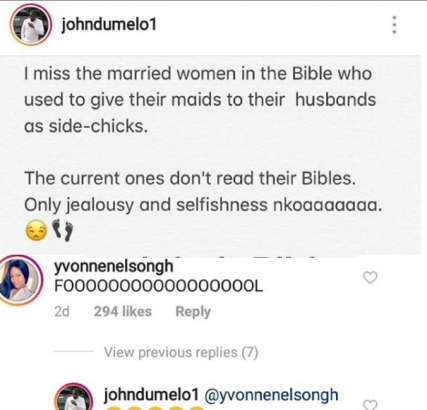 Yvonne’s comment sparked a barrage of criticisms from some Dumelo fans who thought she went too far.
But Dumelo himself seemed not to take Yvonne’s comment as an insult as he replied her with a laughter emoji.

Interestingly, Dumelo’s wife, Gifty, saw the husband’s post and had this reply for him:

“Dear lover, I’m going to pretend not to see this…but if you insist, you can have both maids. They are more sophisticated than the ones in the Bible.”