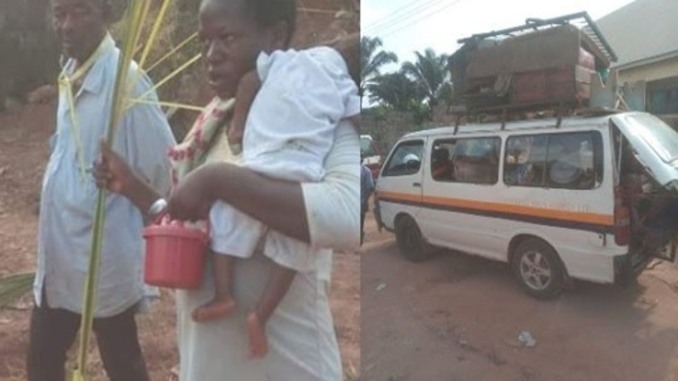 Looking for Anambra Man banished for impregn@neting his own daughter? Then search no more as we bring you all the latest news emanating from the land of billionaires.

Residents of Okofia, Otolo Nnewi in Anambra state have banished a man in his 60s for reportedly impregn@ting his daughter twice.

In photos shared on Facebook, the elderly man who is allegedly from Okija in Ihiala Local Government Area had palm fronds tied on his neck.

His daughter who was carrying a baby also had palm fronds tied on her leg to show that they engaged in abominable acts.

The father and daughter were then led to a waiting bus where all their property was packed in by the community members.

“Happening now at Okofia Otolo Nnewi, the location of the unizik college of health. This man from Okija impregn@ted his own daughter for the second time, now they are asked to leave Nnewi.”

Meanwhile; According to report we got from Awka Anambra state capital Today 15/11/2018 at about 11:30am a murder suspect was arrested following intelligence report by Police Patrol team attached to B’ Division Awka, the suspect named Onwe Sunday male aged 19 years of Mgbo in Ohauku LGA of Ebonyi State at Ifite village,Awka South LGA of Anambra State.

-Fingers and fresh blood inside a container.

Suspect confessed to have committed the dastardly act along with his accomplices one Emeka and Blessing Surnames unknown presently at large, kidnapped the child at a borehole in Ekwashe village, Ebonyi State, took the victim to Umuziaka village where they slaughtered him in the bush before removing his body parts.