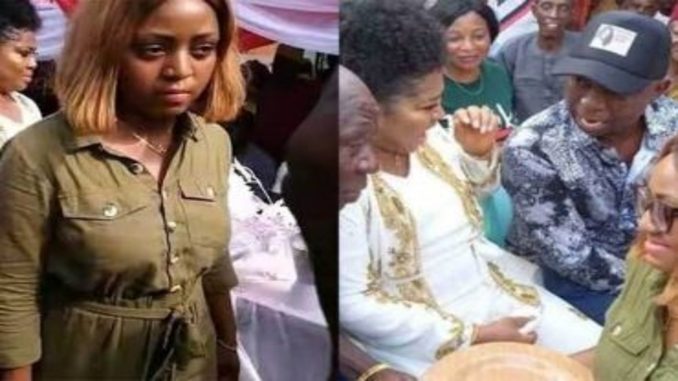 Looking why Regina Daniels Ned Nwoko stirs yet another controversy? then read to the end as we have lots of their stories for you.

Beginning the week, Regina Daniels’ mom, Rita revealed she prayed to God to provide rich and matured husbands for her daughters to marry.

According to the mom of six, younger men have little or nothing to offer so she needs a man, who can provide for her daughter’s wants and demands.

This sparked an outrage among Nigerians because they feel her daughter, Regina Daniels is not yet ripe for marriage.

However, the young actress continues to pepper critics with loved up photos with her 59 year-old billionaire husband, Ned Nwoko.

The actress clocked a year older and her husband decided to take her on a vacation trip to Dubai.

The actress received a beautiful flower from her husband which he had plucked at the resort they are lodged in.

Celebrity stylist, Toyin Lawani was also present in the city known for luxury shopping, ultramodern architecture and a lively nightlife scene to get Daniels ready for her dinner party.

Rita surfaced again to lambast those criticizing her daughter’s marriage to an older man as she stated that she clocked 20 on Thursday and it was her decision to get married to the lawyer at an early age.

The ‘Enemy I Know’ movie producer said Regina has a different kind of wisdom and she is smarter than those insulting her with their ‘dirty mouths’.

Popular s3x therapist, Jauma, who has been loggerheads with Tacha, stepped out with her husband, Senator Fahad Isabor for Daniels’ dinner party.

The businesswoman, who recently welcomed a set of twins, received dollars as push gifts from billionaire politician, Ned Nwoko.