Looking for George Floyd Buried in gold casket as many American celebrities come out en mass to pay their last respect to him? then search no more as we cover all the news surrounding his passing away in the hands of a white cop racist.

Since the death of George Floyd in the hands of Minneapolis police officers, there have been memorable moments where people of a different race, color, language have March in solidarity to condemn the police brutality, racism, and senseless killings of blacks in the United States and around the world.

Most of the protest turned violent which led to burning, looting, and chaos In United States. But on the day of his memorial, we shall be looking into the significance of the coffin in which he was buried with it.

READ ALSO: UNBELIEVABLE: Dead Body Refuses To Be Buried Until It Take Villagers To House Of The Killer, See Shocking V!deo of What Happened Next

Photos of Martin Luther King (III) and Reverend Jesse Jackson paying their last respect to George Floyd as the mourned close to the coffin.

White Police officer pays last respect to George Floyd as he kneels to the ground as George Body was transported during his memorial service. 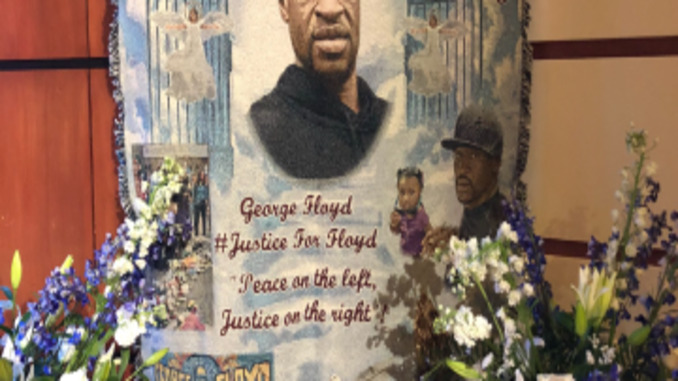 Thousands of Americans pay last respect to George Floyd as they drop flowers and written notes during his memorial.

See photos of American celebrities who grace the occasion as the pay their last respect to George Floyd.

In the picture are the likes of T.I., Tiffany Haddish, Tyrese Gibson, Kevin Hart, Ludacris.