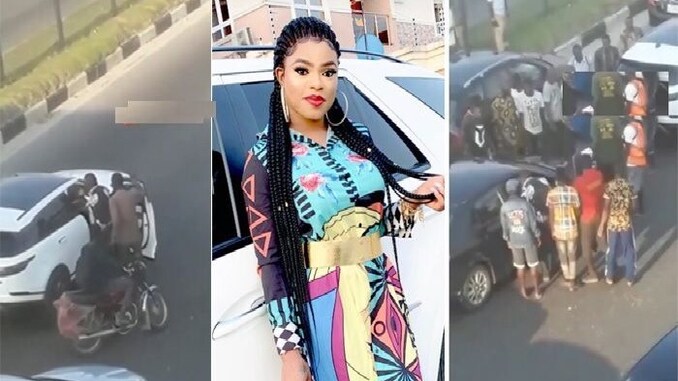 HOW MAN BEATS UP BOBRISKY TODAY

man beats up bobrisky today and almost injured him in Lekki after a Man hit his Range Rover Velar in Lekki today? Continue reading and also watch the video below…

Total violence. I hate men who hits women. No matter what never hit a woman. Sorry Bobrisky, life itself is risky.. sorry bro 🏃

Nigerians are evil – why are they all shouting “Sebi na 2 men dey fight?” una no serious 😂😂

YOU MIGHT ALSO LIKE: Bobrisky Leaks Screenshots Of His DM With Speed Darlington, You Won’t Believe What Speed Is Begging Him For

Meanwhile, Bobrisky has revealed why Cardi B should forgive Offset, and according to him she should because she was once a stripper.

Bobrisky who stated that men cheat, added that he has been dating a married man for three years and can’t leave him if he cheats on him.

Read ALSO : Unbelievable: Watch Video As Another Roman Catholic Priest Was Caught Having S3x With A Rev. Sister

The Nigerian cross dresser who further disclosed that most of the men who visit strip clubs are married and she too must have had affairs with married men in the past, maintained that Cardi B’s past as a str!pper doesn’t make her a saint either.

Read Bobrisky’s post via Snapchat on why Cardi B should forgive Offset below;

This is coming after we reported that Cardi B asked her fans to stop hating on Offset, after he came on stage while she performed at the Rolling Loud festival to beg her for forgiveness.

Following Offset’s apology, social media users called him out for being so insensitive and disrupting her performance.

Others insulted him for not showing remorse all the while he was cheating, only to turn around and start begging for apology now that it’s too late.